You are here: Home > Trump turns to routine matters after day of bashing media
January 25, 2017 in Global Media 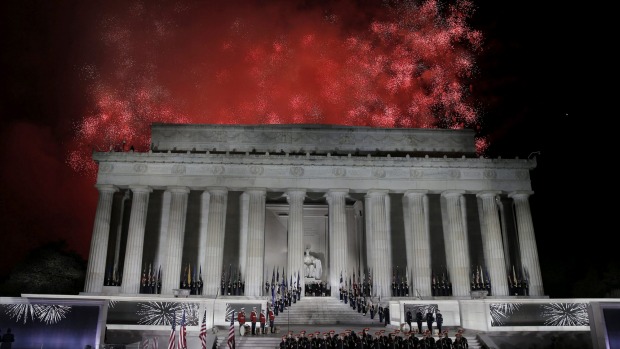 Trump turned a bridge-building first visit to Central Intelligence Agency headquarters on Saturday into an airing of grievances about "dishonest" journalists, while wildly overstating the size of the crowd that gathered on the National Mall as he took the oath of office. He promised to change numerous policies put forward over the last eight years by Democratic President Obama.

Just before noon, Donald Trump will stand in front of the U.S. Capitol, place his hand on Abraham Lincoln's Bible and take the oath of office as the next president of the United States. Trump accurately predicted his election would be the ultimate rejection of establishment politics, dubbing it "Brexit plus, plus, plus".

Even suggestions of weak enthusiasm for his inauguration clearly irked the new president, and appeared to knock the White House off its footing as it took its earliest steps.

The president presided over the traditional inaugural fanfare, taking part in the official parade down Pennsylvania Avenue before an evening of balls and other festivities. As he begins his first full week in office Trump is trying to put a rocky start behind him, after a weekend spent reacting to lower-than-expected attendance at the Inauguration.

The Trump administration also said it is ready to cancel what it called, "harmful and unnecessary policies".

Mr Trump has said in remarks this month that leaving the 28-nation European Union, a decision taken by British voters in a referendum previous year, will be good for Britain and that he will offer the nation a quick and "fair" trade deal.

After Mrs May, Mr Trump will meet Mexican President Enrique Pena Nieto on Jan 31, said the White House. Yet instead of trying to bring a divided nation together, a nation more of whose citizens voted for his opponent than for him, he used his inaugural speech and his first actions to divide it further.

Before that, you'd have to go all the way back to Ronald Reagan in 1981, who was seen by 41.8 million viewers (Nielsen tracks inauguration ratings back to 1969).

"President Trump is committed to eliminating harmful and unnecessary policies such as the Climate Action Plan and the Waters of the USA rule", it states.

"It looked like a million and a half people" there on Friday, he said, rubbishing media reports that there were as few as 250,000 people.

As TheWrap previously reported, Trump has indicated that he will also keep running his personal account. Seeing as Obama's turnout in 2009 was estimated at 1.8 million, photographic evidence fails to back up the new president's claim. Most of Mr Trump's supporters know this, and are prepared to wait a while.

Serena Williams eases into Australian Open quarterfinals
Williams lost the top ranking, which she had held for three consecutive years, to Kerber after the German player won the U.S. The last time she made it this far, Lucic-Baroni also had to face a woman in the semifinals with 22 majors - Steffi Graf.

Trump tells USA automakers he will ease 'out of control' environmental restraints
He has threatened to apply hefty tariffs on USA companies that move their operations overseas and import their products back here. He said "we look forward to working with Trump and members of Congress to strengthen the American manufacturing industry".